Competition for the seat of the European Music Academy in Chodzież.

The competition design was based on the following
assumptions: - minimum interference in the existing, natural landscape, -proper and optimal communication between the object and the environment, - the possibility of staging the implementation while avoiding the impression of an unfinished object (... interrupted construction) - an attempt to create a unique urban complex immersed in nature: inscribed in the landscape of forests and lakes. The idea was to blend into the slope of six blocks - "stones" freely scattered along the forest road. Chunks are independent functional blocks. Each
was given an appropriate scale and assigned the appropriate function: entrance, administration, gyms, hotel, club and planned for implementation at a later stage of the concert hall. To connect functions and chunks, a communication route sliding across the area was stretched between them. The open arcade was covered with a characteristic roof - a stave, which in essence uses the play of light and shadow by drawing unique patterns in the background - like a musical abstract notation. The foreground of the buildings includes a large terrace shaped terrain for recreation. The hotel was located near the access road with parking, and the concert hall, which requires a lot of infrastructure, was placed at the bottom of the band. This arrangement allows a comfortable ramp and the best exposure. Individual buildings - in accordance with the terrain - are placed on different levels, which emphasizes the dynamics of chunks, surfaces of roofs and walls. The elevations are dominated by clinker brick and raw reinforced concrete. Roofs with a slight slope are covered with titanium
zinc sweet metal. Despite the loose composition and different scale, while maintaining moderation in the use of forms and materials, the whole creates a compact and coherent team. The project is a timeless composition - it show echoes
and moods of the post-glacial lake district landscape. 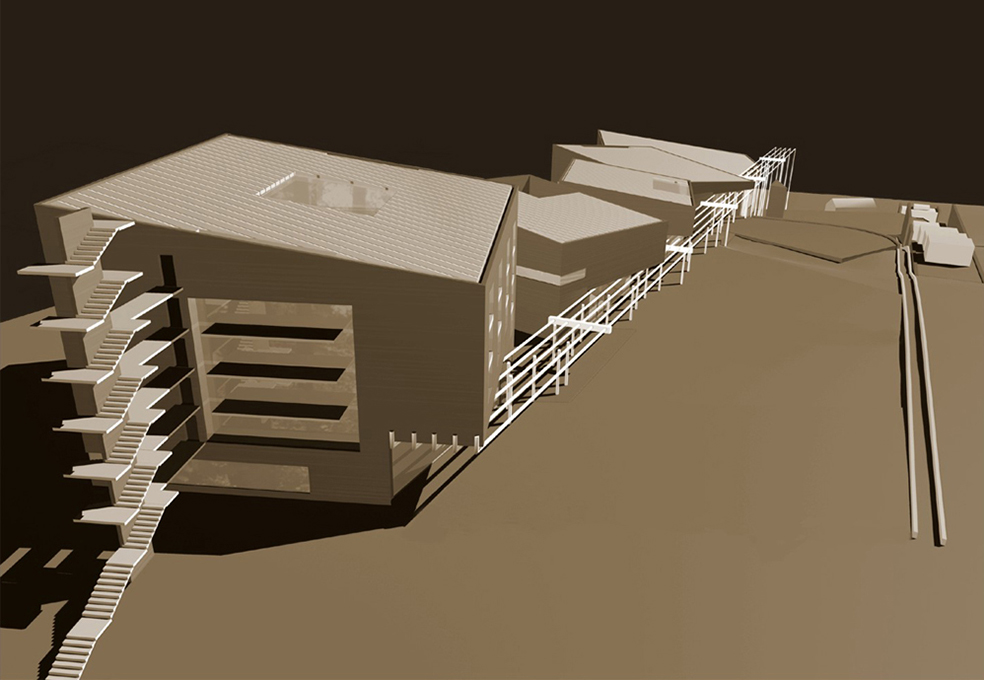