THEMATIC GARDENS
The park is divided into 4 thematic gardens: water, wind,
fire and earth garden. Water garden - in the central part a water tank, surrounding the existing pavilion building, which is part of the rainwater retention system and a biodiversity enclave. Wind garden - overgrowing part, covered with tall grasses, waving in the wind. An additional attraction in this
part of the park will be wind sculptures and instruments, bells making sounds thanks to the movement of air. Fire garden - will provide an environment for a fire pavilion with military exposure. Earth garden – natural and forest nature.

GREEN ROOFS
On the roof of the building, the plantings are designed, inspired and modeled on xerothermic grasslands and thermophilic rock vegetation, which can be found on limestone hills mainly in the western part of Krakow.
Associations with the Twardowski Rocks or the Krakus Hill are desirable. This type of planting will be perfect on the roof of the building, and at the same time create a nidus for many insects and butterflies.

CONTEXT
From the south - the unspecified presence of the fort marks
the default border, hence only the flood embankment divides the area from the Vistula. From the north - roadside, valuable birch and planned access. Further contemporary residential buildings. The future road leads to the planned Music
Academy, which marks the border from the east. There remains the west side, which will connect the new building with the city and designate the entrance and the "face" of the new Philharmonic.

GRZEGÓRZEC FORT
There is not much of survived visible relics. All the more
important is every trace. It haven’t still been studied what is hidden in the ground. The area is covered with lots of trees. In order to protect the precious landscape, we have reduced the interference to a minimum.

URBAN
We adopted the most likely outline of the fort. The planned
arrangement of alleys will be parallel to the fort creating a zone where you can freely discover the next fragments of fortifications, gradually restoring the intriguing world from the past. Using the remains of fortifications throughout the area, a unique, not fully defined park of attractions is created.

BUILDING
A driveway and entries will be created near the roundabout.
The square above the area, accessible mainly to pedestrians through ceremonial stairs and comfortable ramps, provides both comfort of access and driveway to the main entrance. An unusual complement to the function and form of the building is the public roof, covered with lush vegetation, which is accessed by stairs, elevators and a ramp located above the recital room, which surrounds the green maze flooded in the roof.

ASSOCIATIONS AND SYMBOLS
Twardowski Rocks - a phenomenon characteristic for Krakow,
has become an impulse to search for local references in the project that will underline and express the specificity and spirit of the new place. The "limestone" tectonics of the block and the horizontal language of the façade referring to the rocks, chiaroscuro and color, as well as the vegetation covering the roof, faults and crevices, have to bring associations.
The entrance was shaped like a portico. In an irregular
block, such a classic motif is an attempt to continue the rich tradition of building public buildings. The park and edifice are strongly embedded in nature and associated with the cultural landscape, together they create the magnetism of the place - contemporary Arkadia, but firmly rooted in tradition and local
context.

INTERIOR
The first welcoming space is a two-story vestibule. It is a
zone of ticket offices, cloakrooms, souvenir shop and above all meetings and expectations of the audience who came to the concert. From here, you can get an independent staircase or elevator to the observation deck and to the restaurant located on the top floor. The central place of the building is a multi-storey foyer, which allows comfortable and logical movement around all public areas of the building, use of themed rooms, bars and toilets, and above all reaching any level of each of the three concert halls. The spectacular stairs emphasize the
"opening" of the interior to the park and fort. An attractive complement to the building's function is the public, lush roof, which is accessed by stairs, elevators and a ramp located above the recital room, which surrounds the maze buried in the roof. Due to the neighbourhood of the Vistula River and high groundwater, it was decided to adopt the stage level of all concert halls in the existing area. Such a decision - to fit the height of the largest room in the local plan - determined the structure and functionality of the building. In the horizontal layout, the building is clearly divided into two parts: for the audience and musicians. The foyer is a common part that
serves all users. However, the music part fully reflects the specificity of the place expressed in the assumptions for the competition. The edifice will become the seat of three outstanding musical groups. Their patrons are 2 public entities: the Local Government of the City of Kraków and the Marshal of the Lesser Poland Voivodeship. Thereby, we are dealing with two objects in one building. Both the connection and the division resulting from such assumptions are clearly legible in the spatial arrangement and structure of the building. 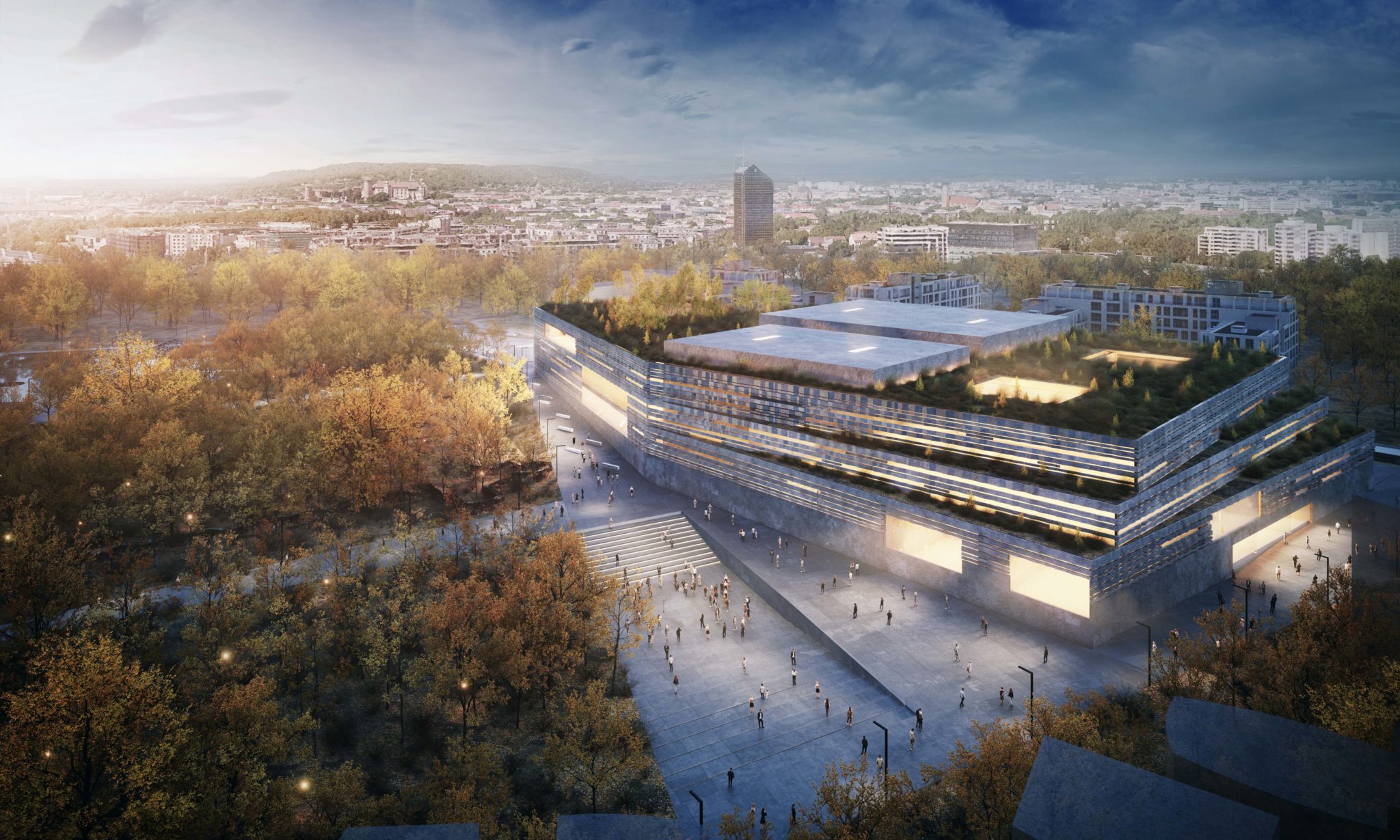 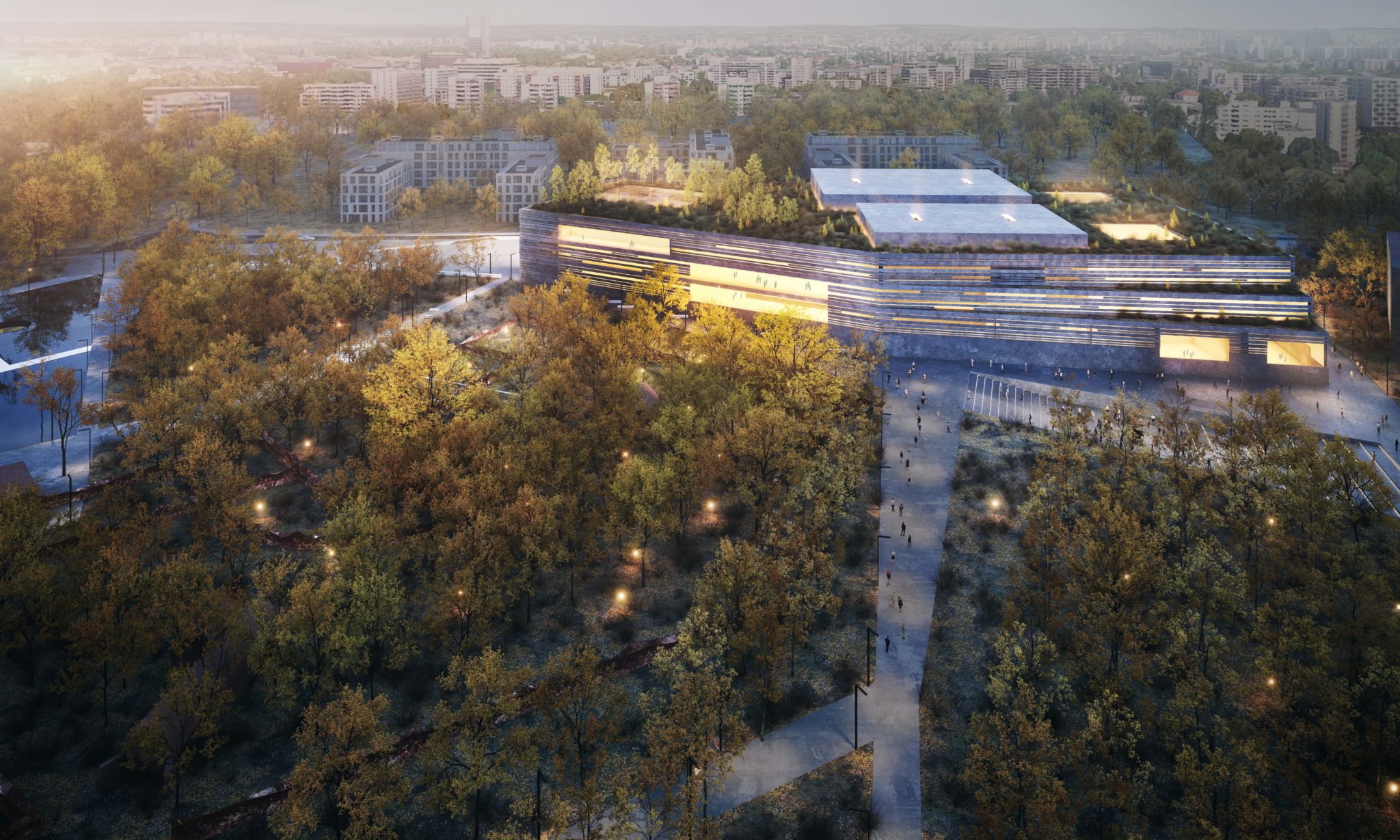 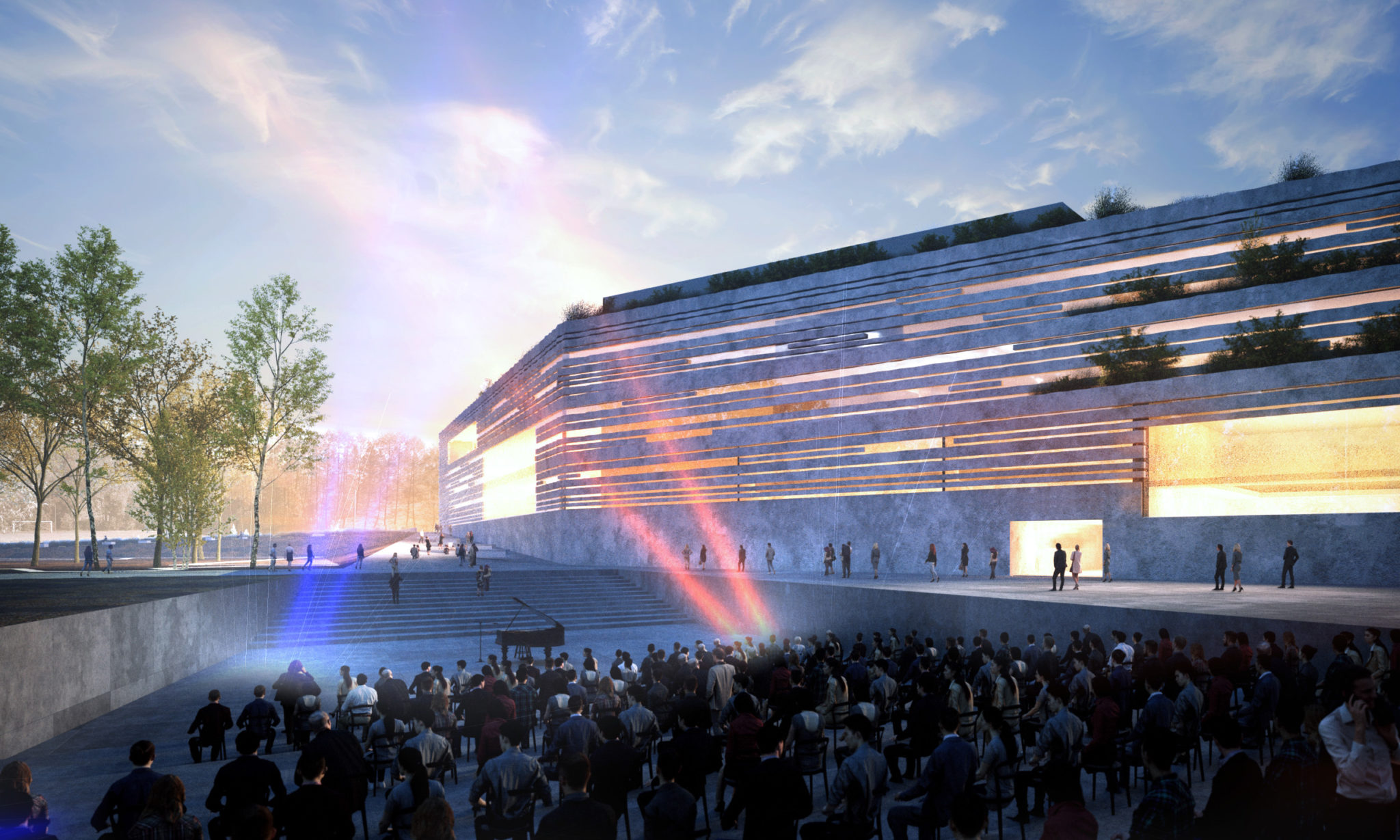 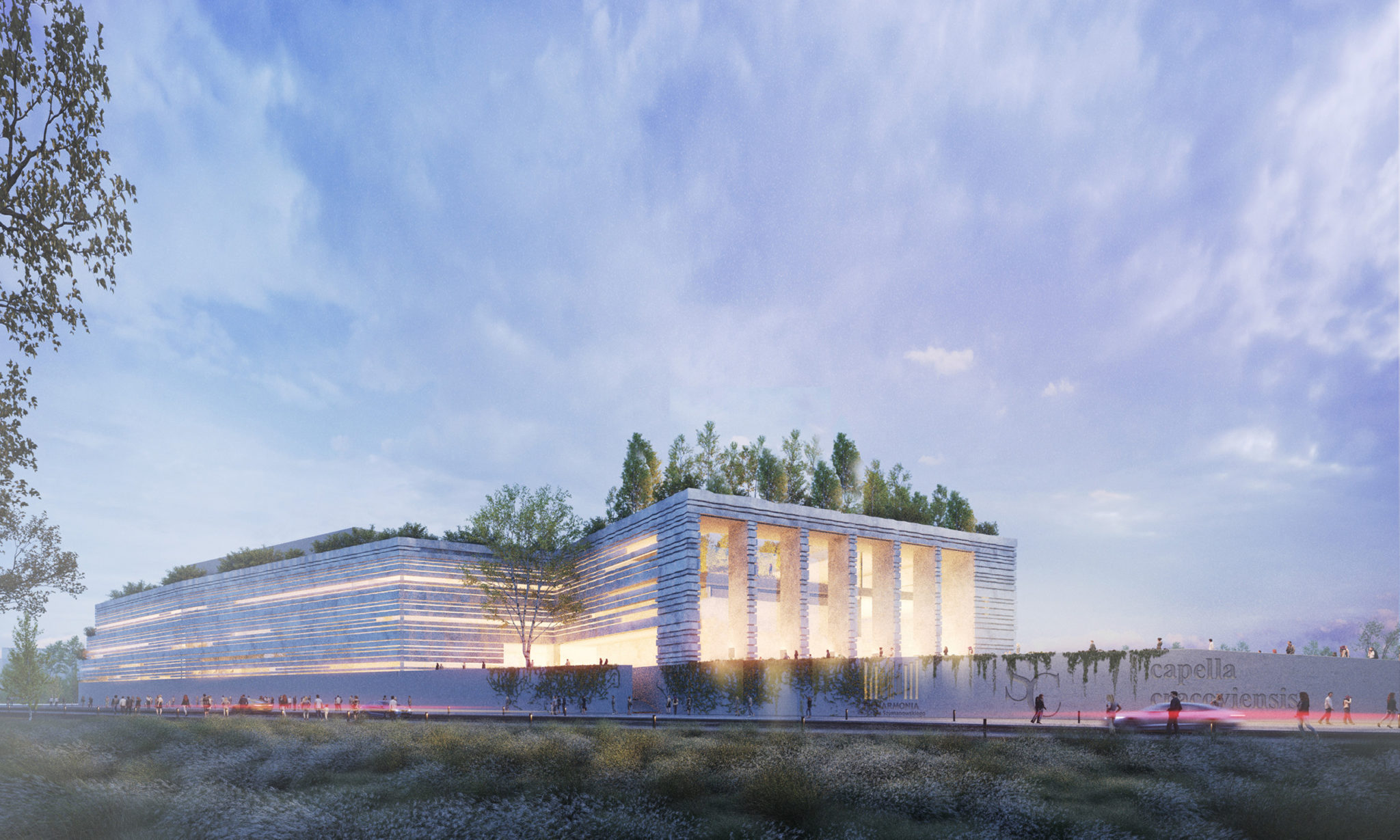 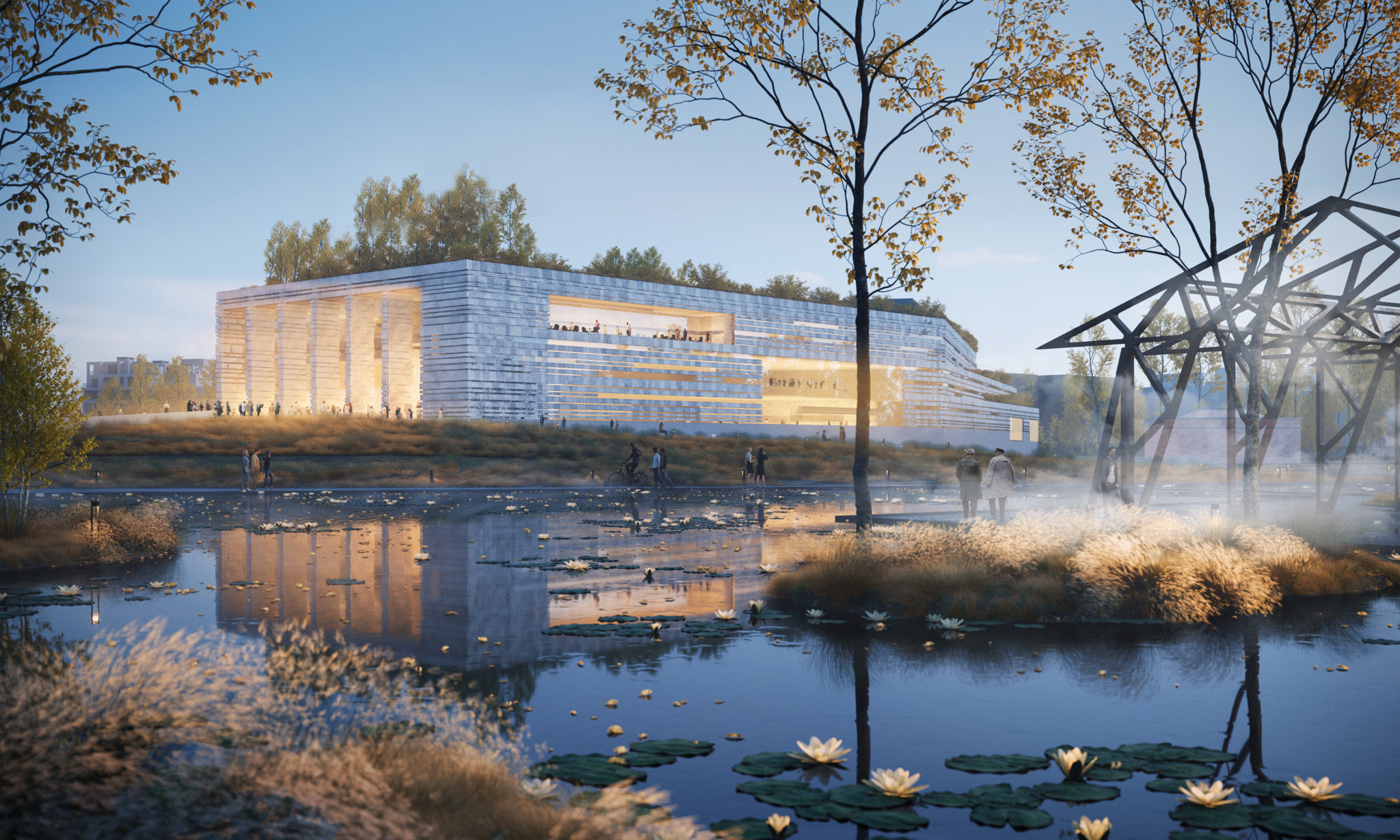 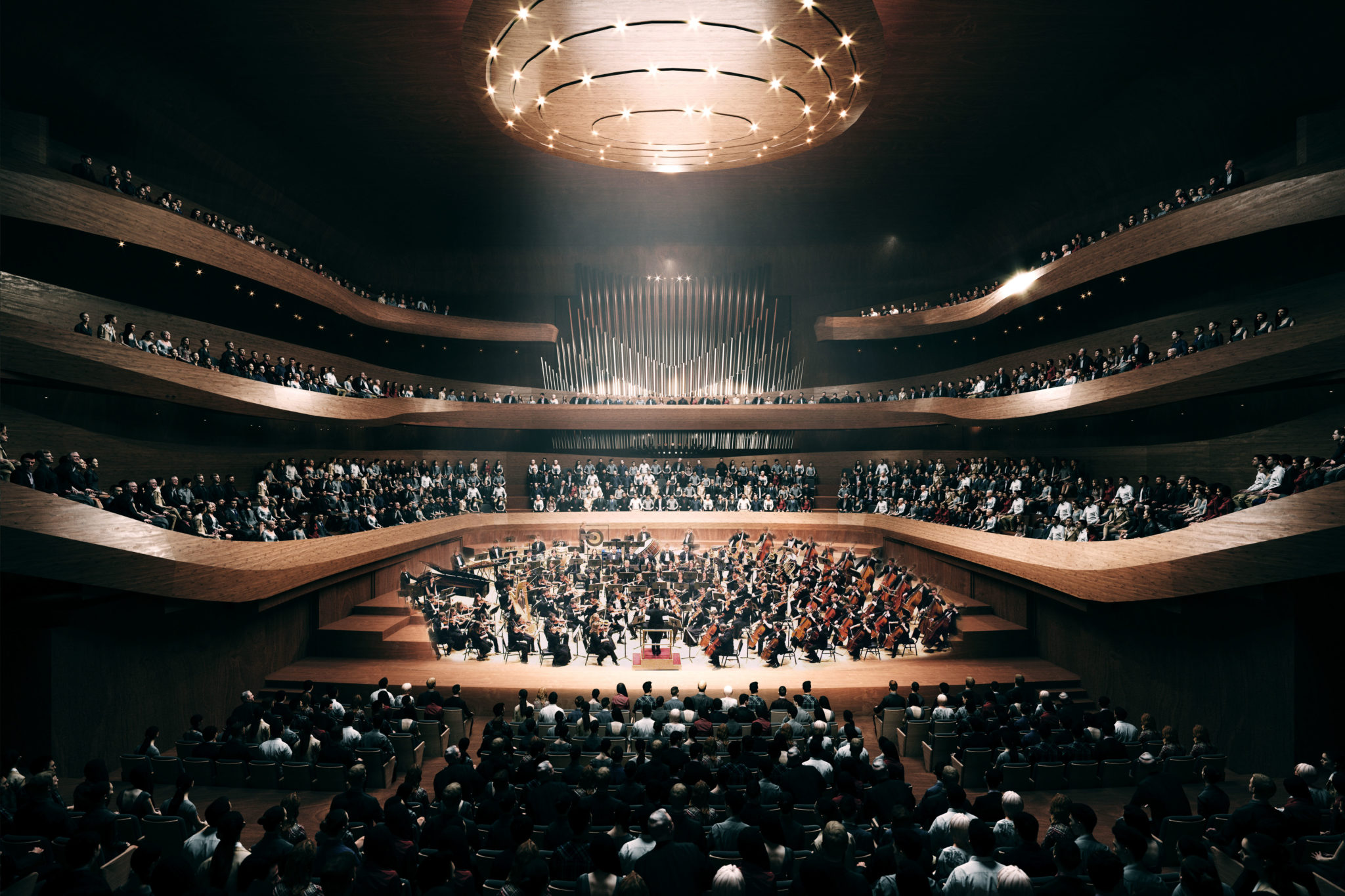 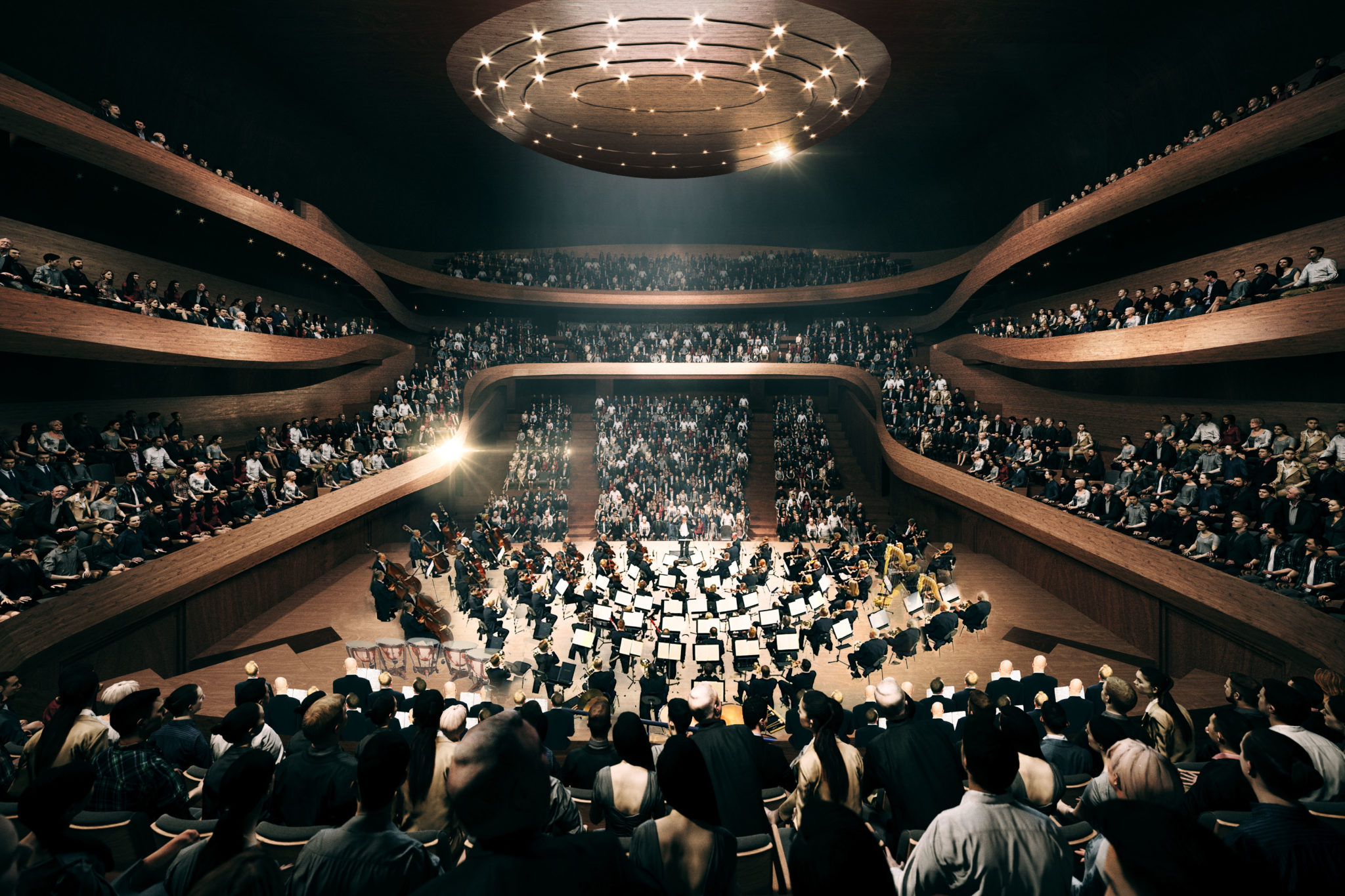 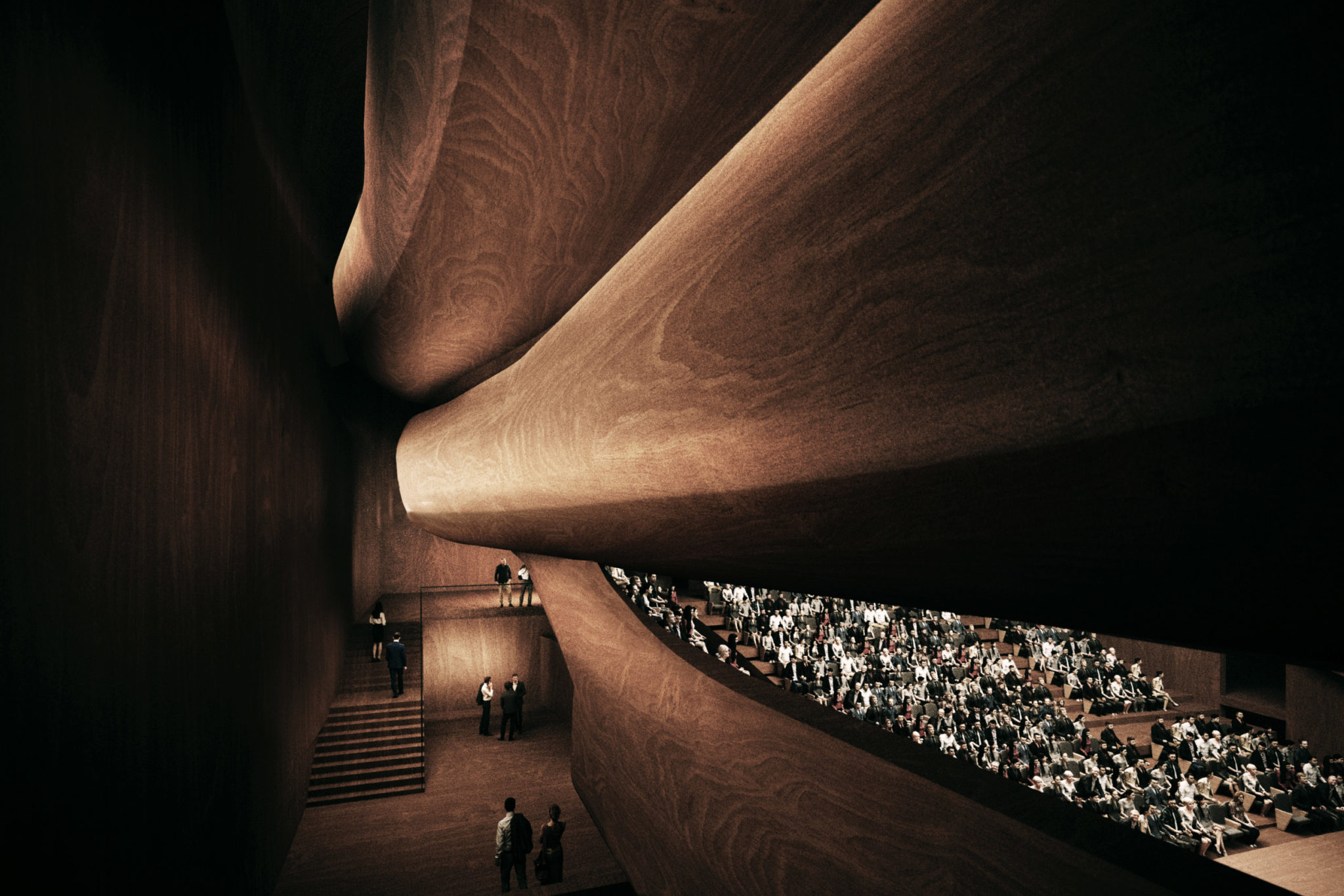 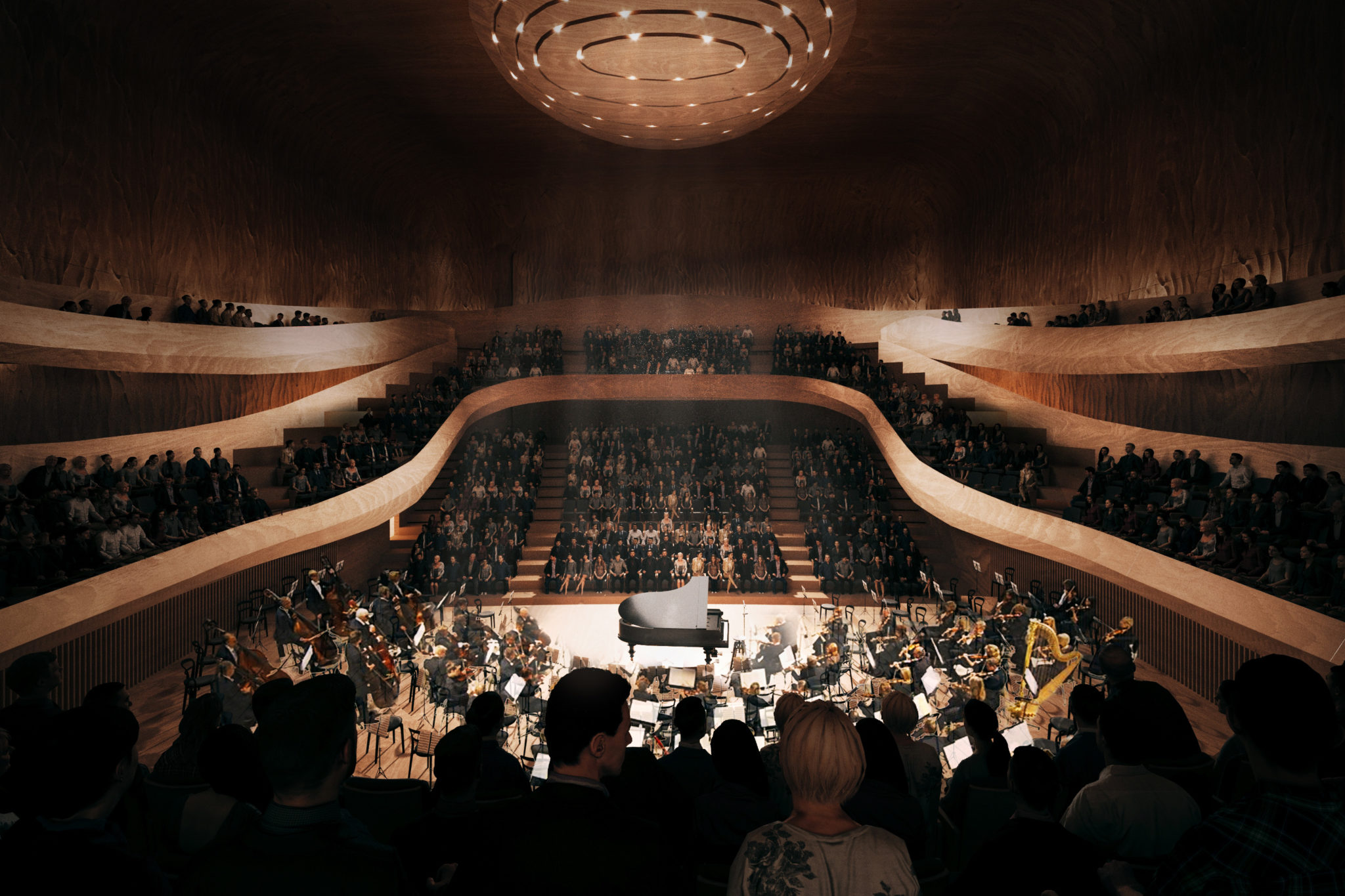 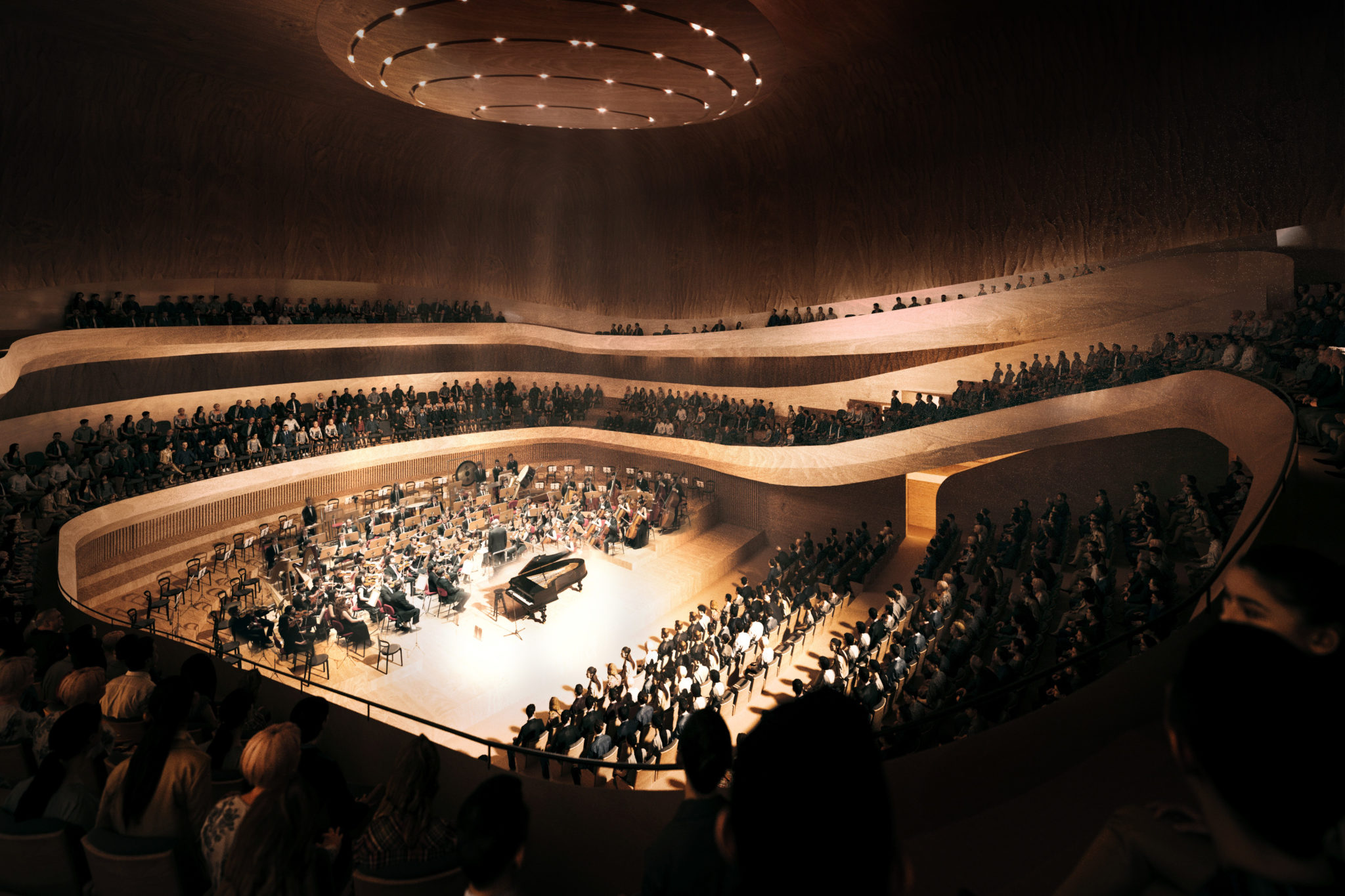 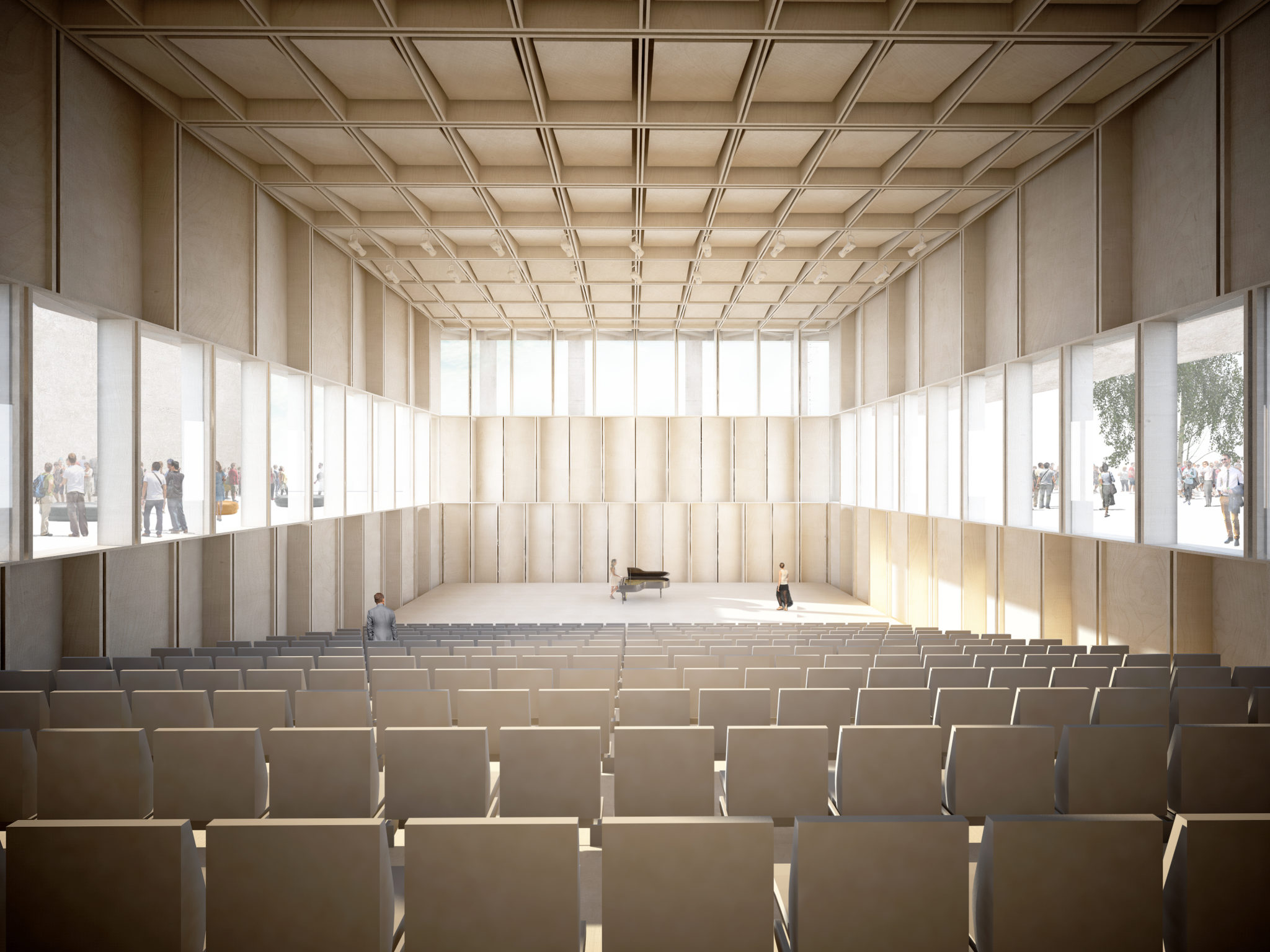