Modernity inscribed with respect in the local context is an identification of the Puro brand. This will also happen in Katowice. The hotel design refers to the assumption of the "Western Wall" of Korfanty Avenue, which consists of low pavilions and high buildings, some of them with the status of icons of Polish architecture. The 14-storey and 56-meter high part will be visible from the Avenue. From the west, the building will have a two-story plinth corresponding to the height of the neighboring BWA art gallery.

The key decision was to bring the building as close as possible to Korfanty Avenue. According to the local plan, its shape will mark a new frontage, which will contribute to the creation of a street with a metropolitan character. The hotel's podium on the ground floor and first-floor level will hold public functions such as a restaurant, café, art gallery, and conference rooms. As a result, the building will serve both - the residents of Katowice and hotel guests.

The plinth open to the city will also be as transparent as possible –that is why there are the curtain walls on the ground level and they continue on the first floor, both from the Avenue and the back façade. In the future, another building and the passage continuation will be built there.

The two-story arcade accents the main entrance and creates a friendly space for pedestrians.

The dynamics and lightness of the building are emphasized by the overhanging of the hotel part. Inside, there are 247 comfortable rooms.

The impression of opening to the city will be strengthened by the tectonics of the front facade: a mirror coating of glass. Thanks to the pleats, each room will gain a magnificent, fully glazed bay window with a panoramic view.

The shape of the front elevation is a nod to the first Polish high rise buildings, so-called "niebotyki". Katowice and Upper Silesia in the interwar period were precursors in the construction of these pioneer buildings. It is characteristic to emphasize the vertical articulation of the facades by using vertical pilasters that capture the windows to the rhythm of soaring stripes. In the design of the Puro Hotel, we deal with the far processing of this motif in the form of glass bay windows.

The other façades of the hotel also refer to the character of the region, especially the brick architecture of Silesia. Bricks in a soft, dark graphite color are used. This original way of laying them will create a characteristic relief on the facades, consisting of vertical stripes with a variable rhythm. Brick is a timeless material that will make the building to enter a creative dialogue with tradition and localism.

The comfortable interiors of the Puro Hotel will be enriched by local motifs taken from Silesian culture. The contemporary design will be combined with ingenious crafts and contemporary art. The British studio DeSallesFlint, which cooperates with the Puro hotel, is responsible for the interior design, creating their unique atmosphere.

Architects from Konior Studio cooperate with a foreign partner at every stage of the project. The idea of ​​the main hotel lobby, which runs through entire building, was created in the Silesian studio.

Thanks to this, Korfanty Avenue will gain a new effective connection of the interior of the hotel with a passage at the back of the building. After crossing the threshold, guests will find themselves in an impressive two-story hall. Public floors will be connected with impressive in the form, dynamic steel sculpture stairs.

The interior of the Puro Hotel will be dominated by raw materials: concrete, brick, wood, and steel.

The Puro chain of the hotels offers guests the perfect location of their hotels in city centers. This location is a challenge to create a friendly space close to nature. Hanging gardens in Puro in Katowice will create a phenomenal, green enclave in downtown buildings.

The lower garden will be built on the roof of the podium on the west side, so it will separate from the busy avenue, ensuring peace and quietness. This green terrace, located on the level of the second floor, will complement the recreational part of the hotel, thanks to which guests will gain the additional opportunity of active recreation in the open air.

The biggest attraction will be built on the top of the building - the upper garden. The one of a kind green terrace connected by a spiral staircase with a sky bar below will provide a unique zone of entertainment and relaxation. 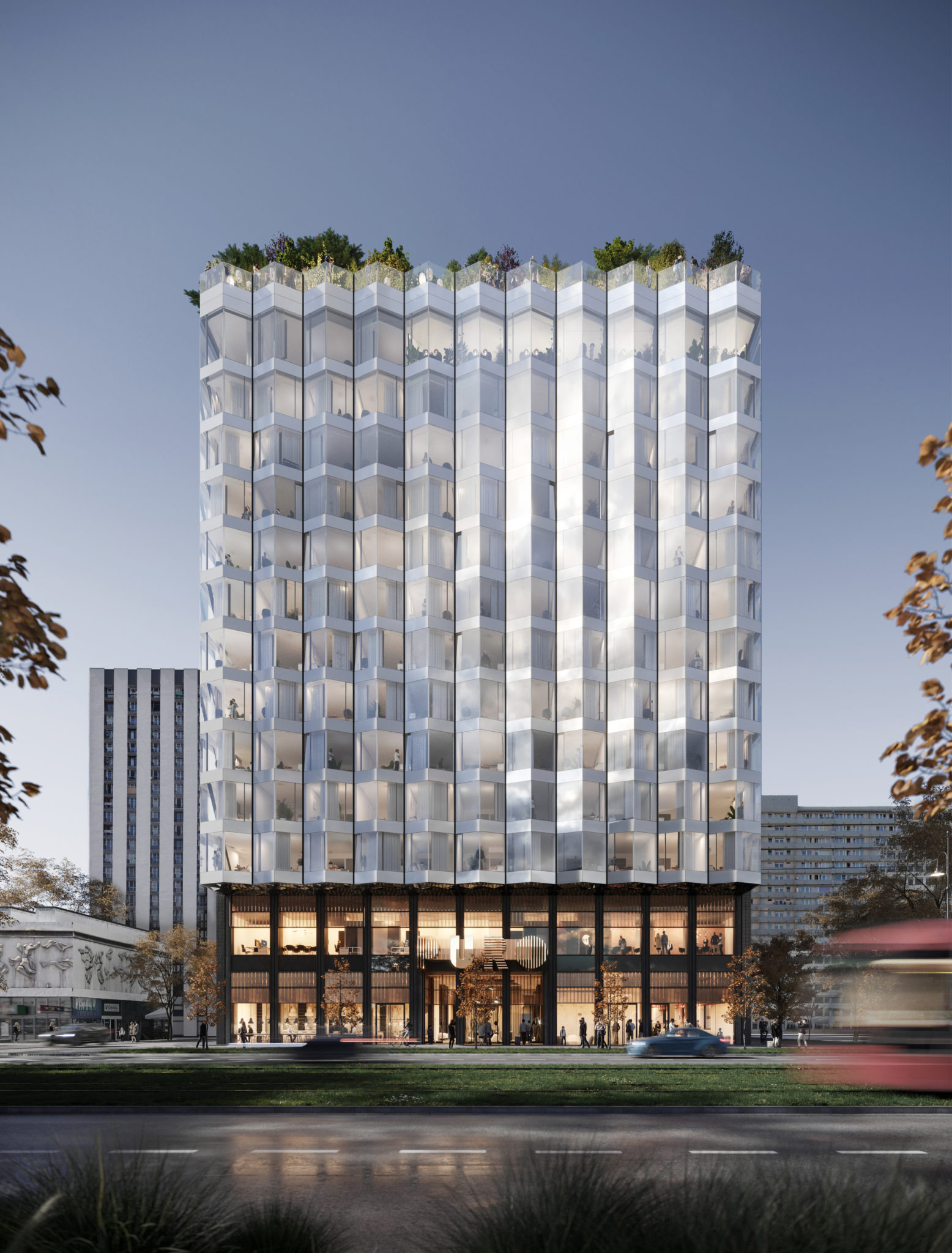 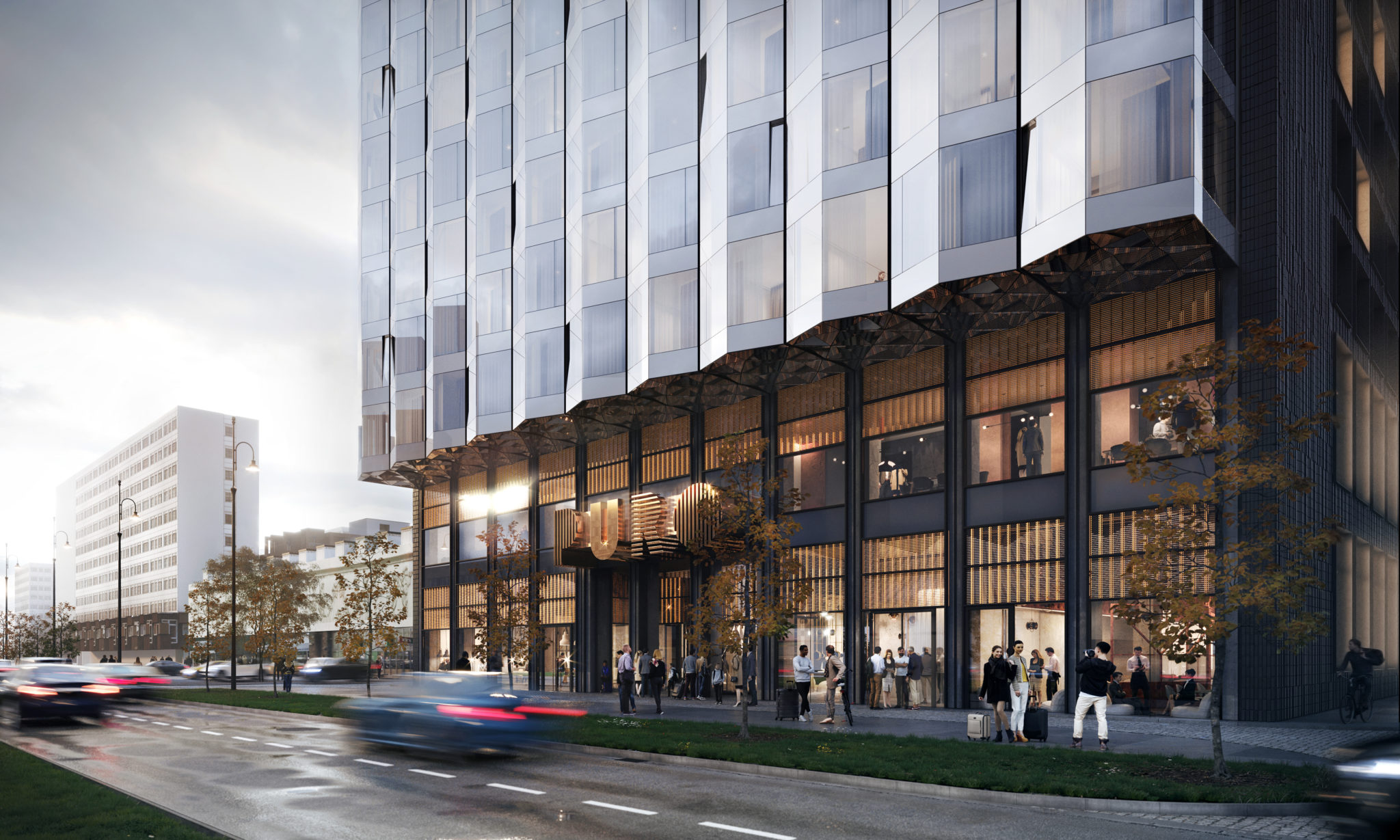 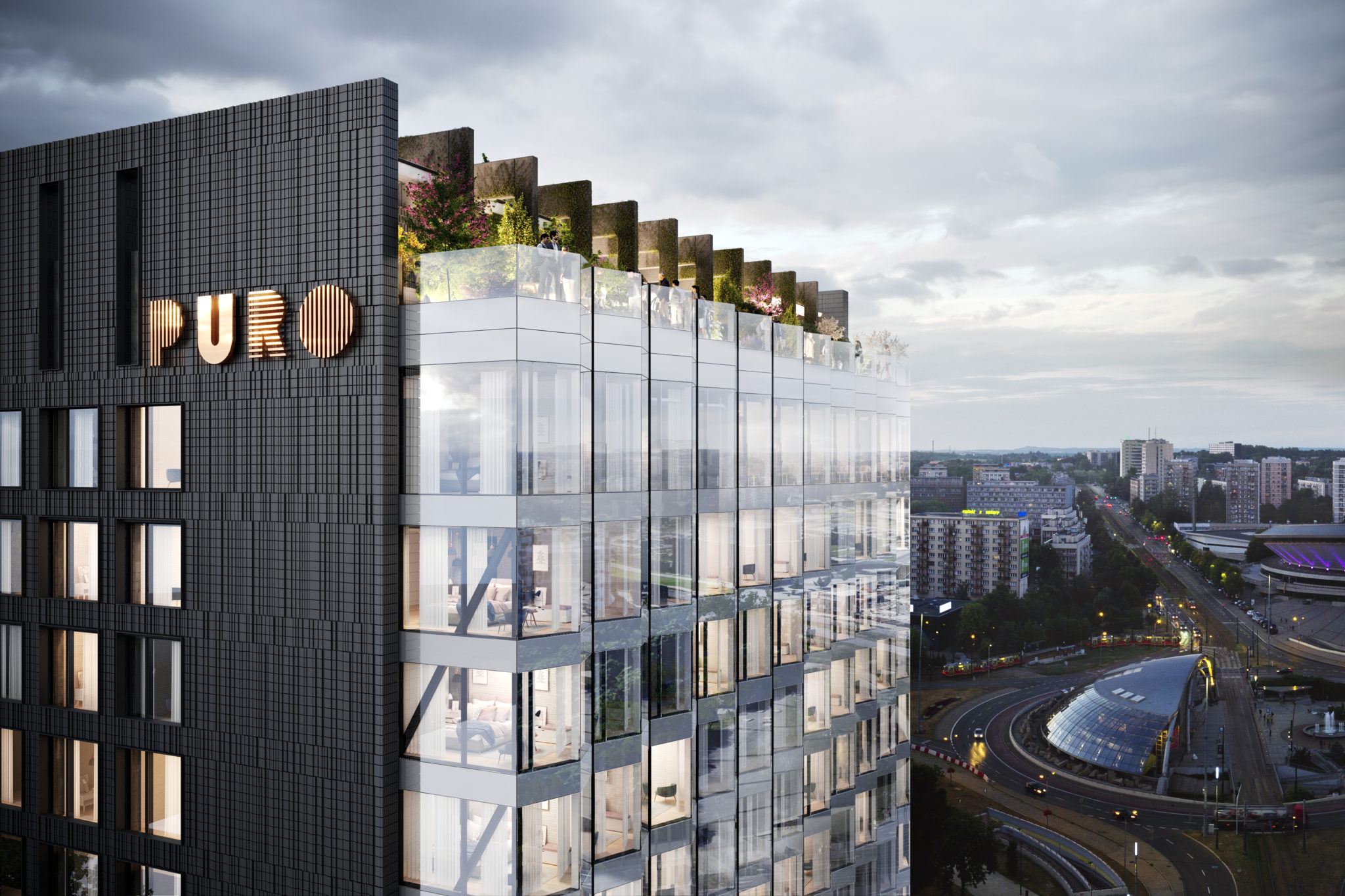 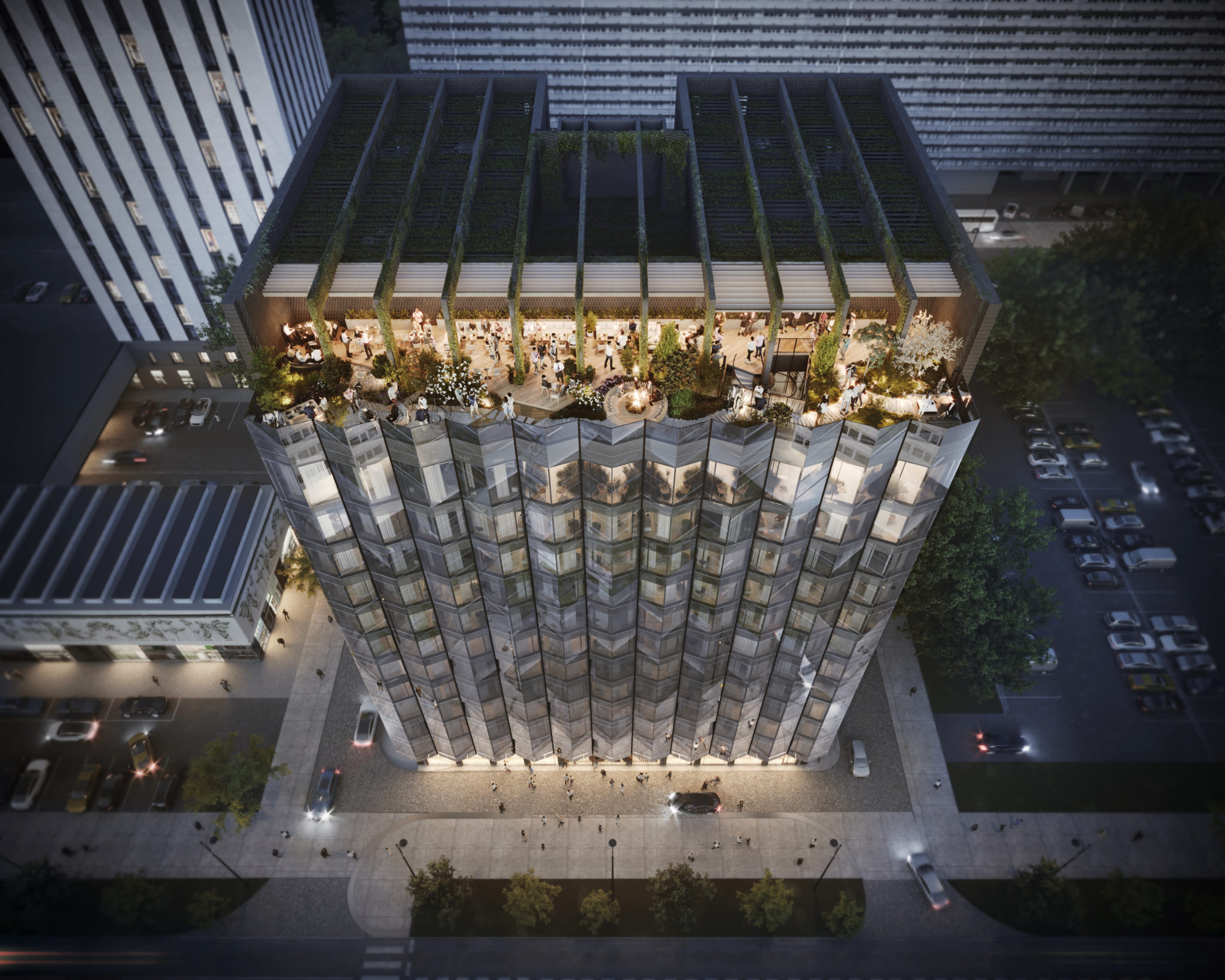 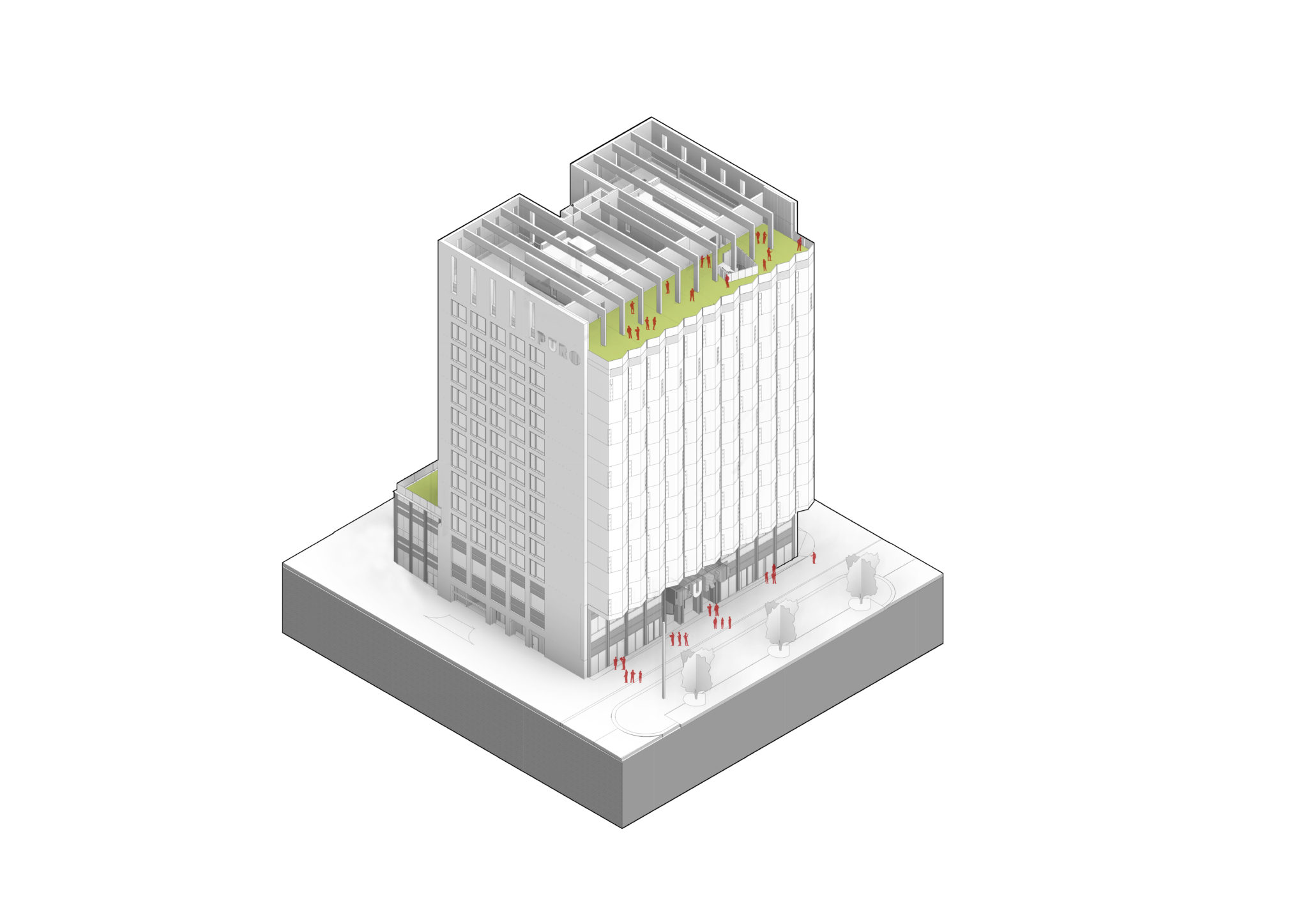 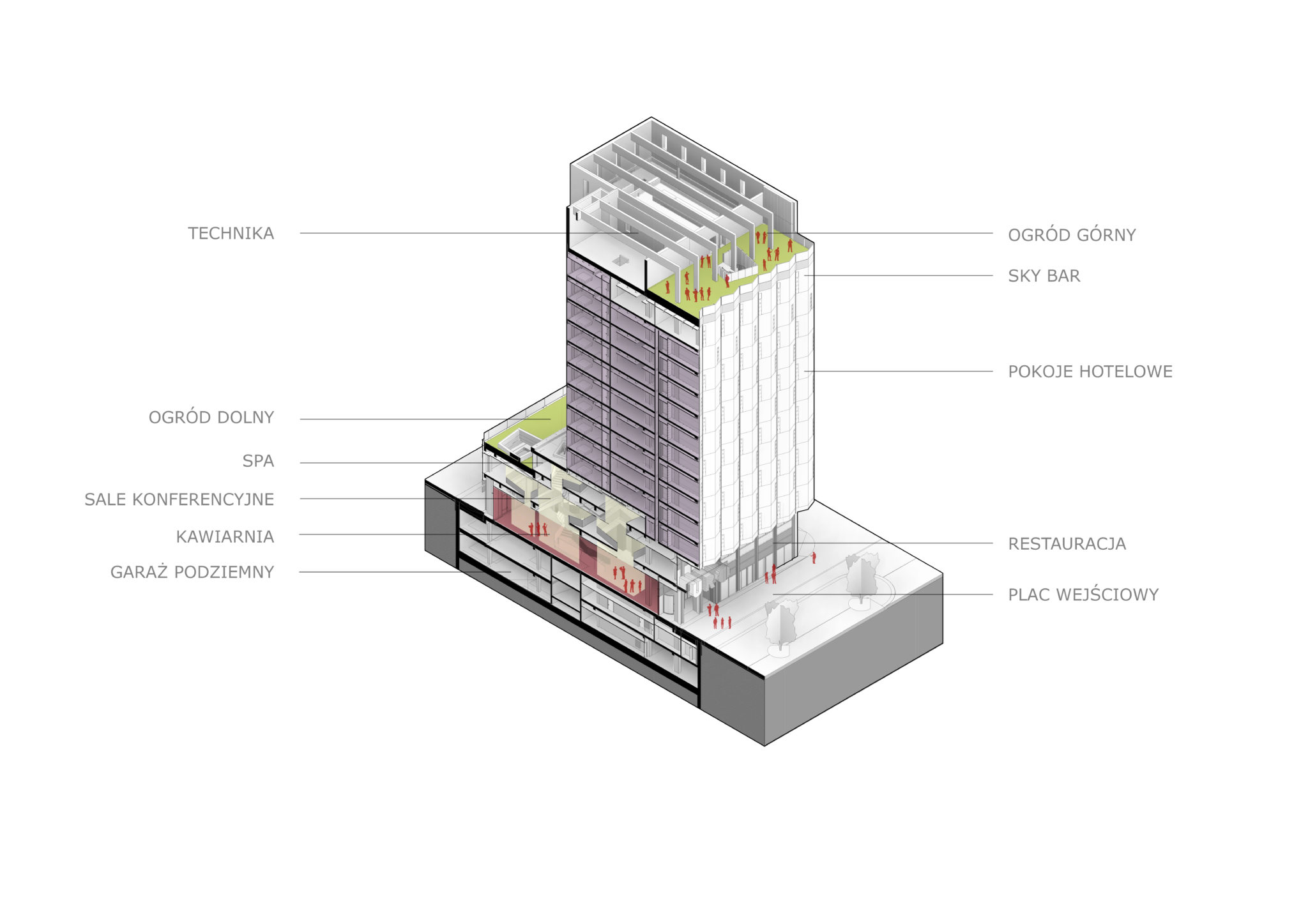 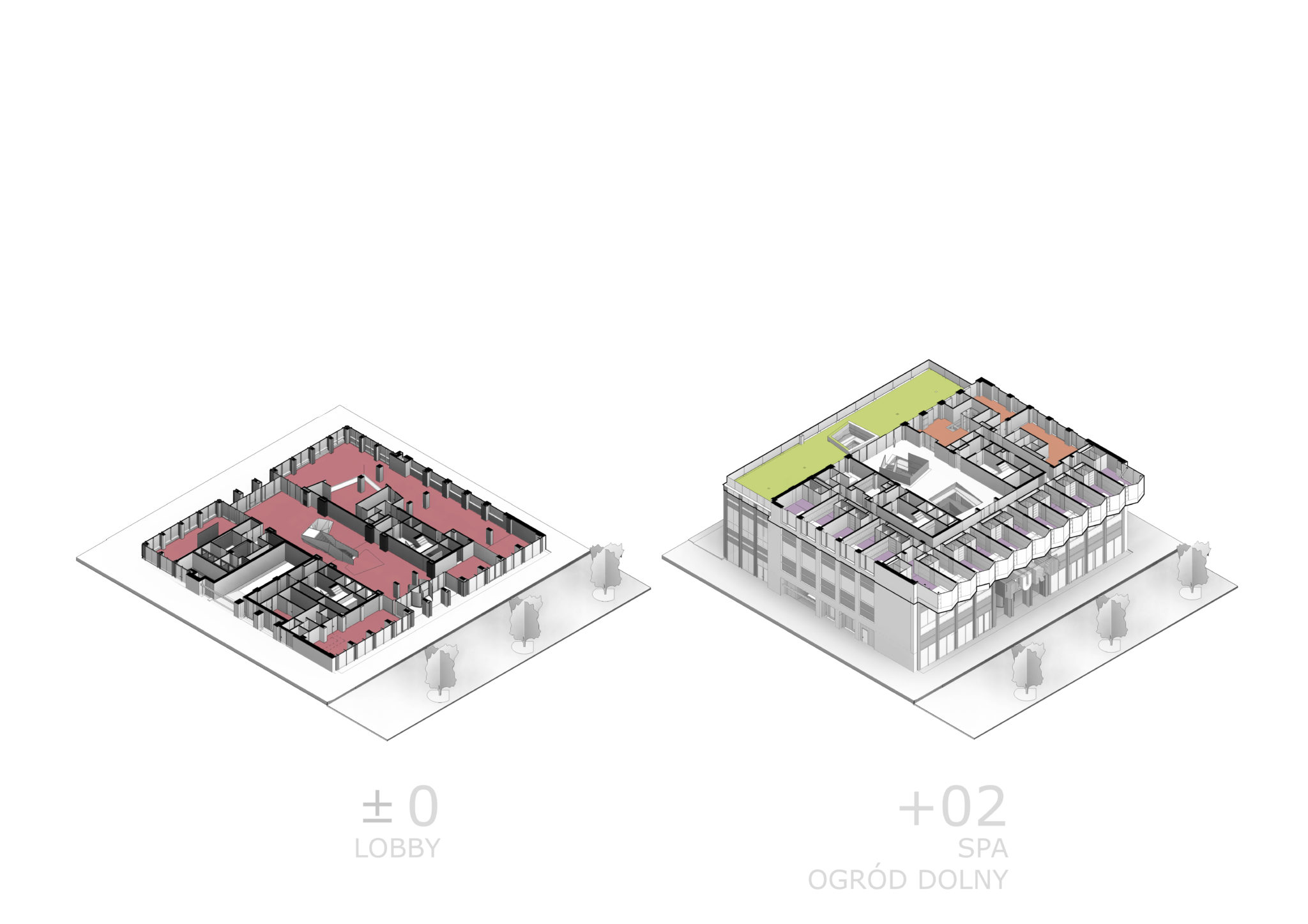 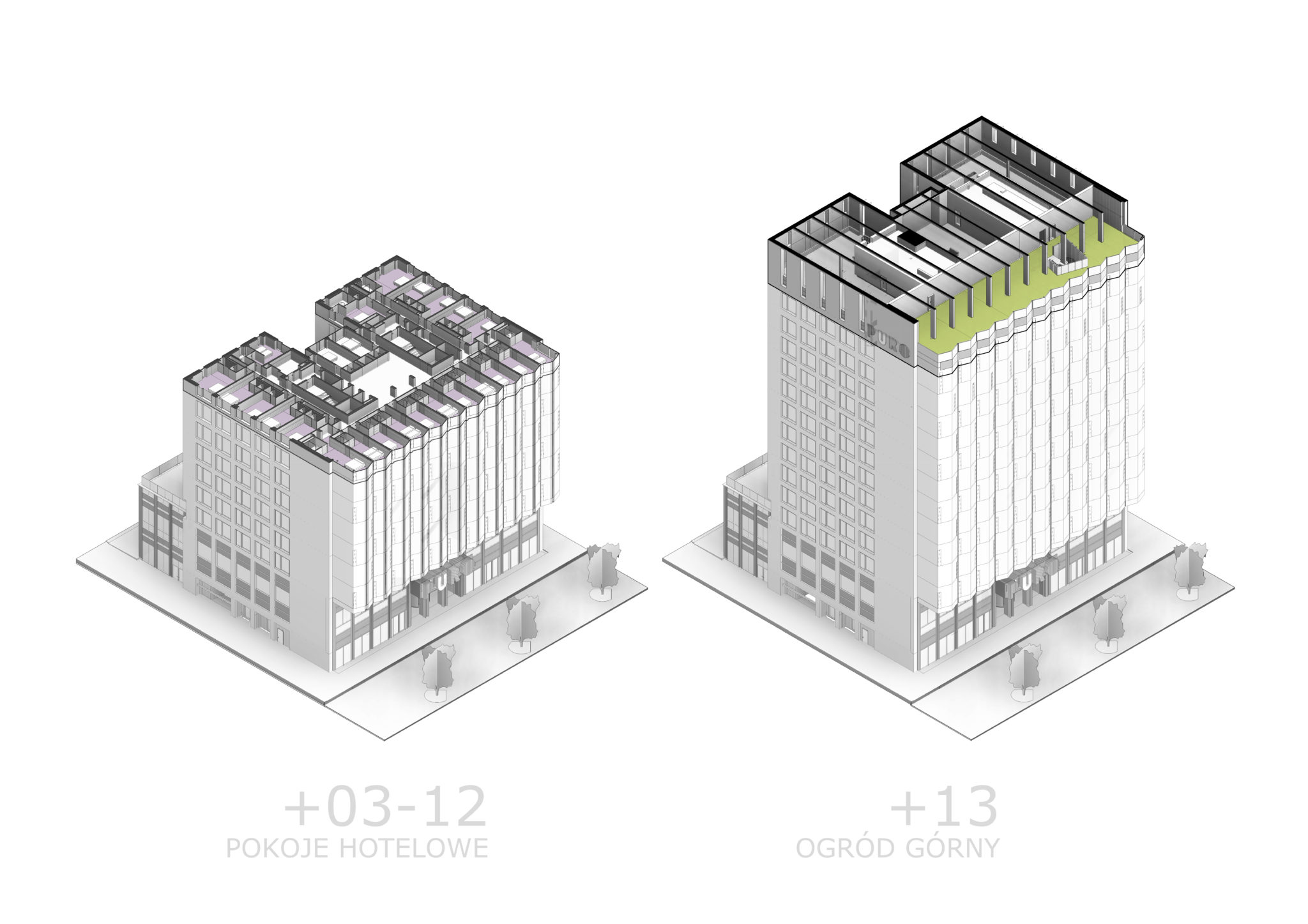 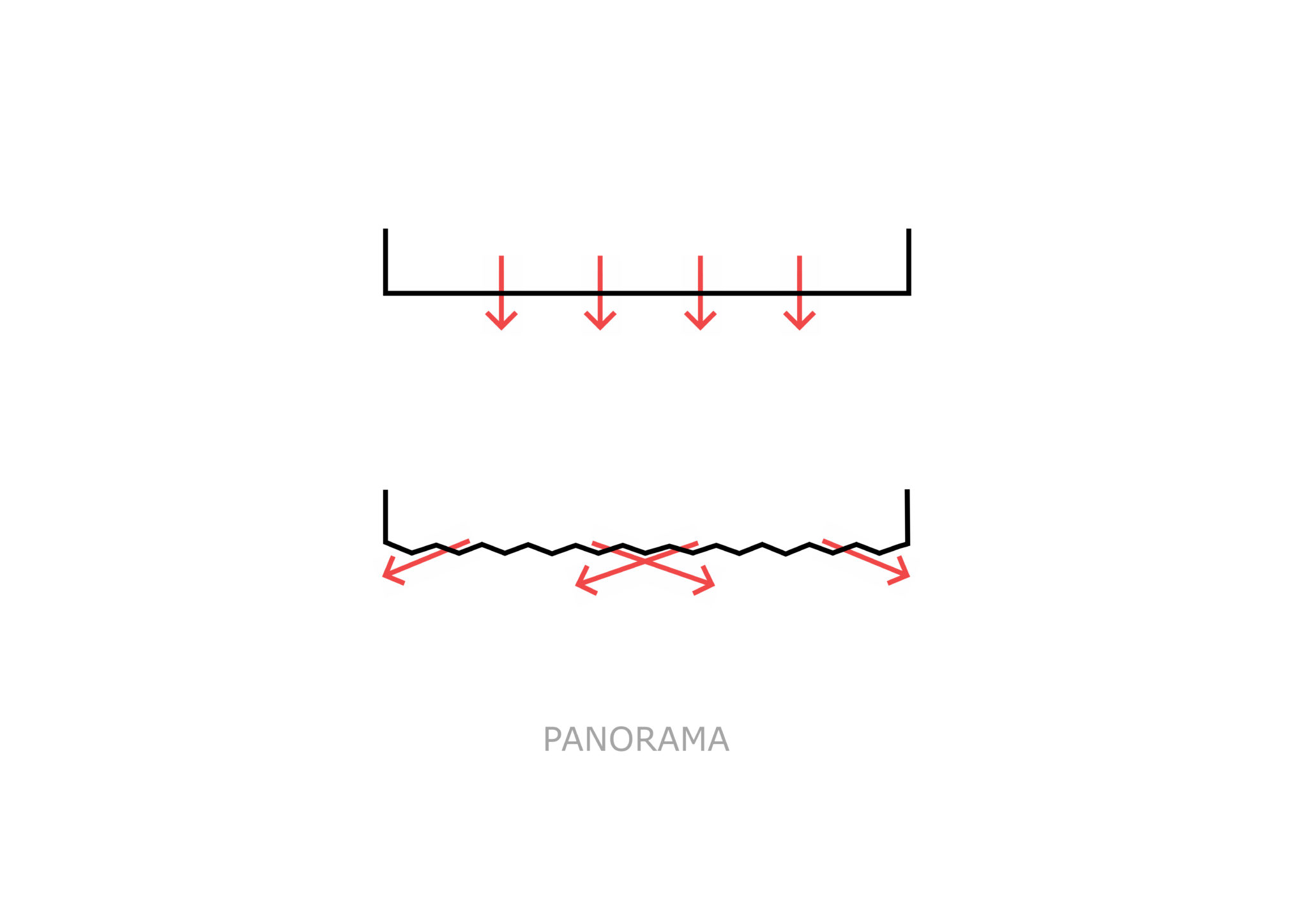