The front of the building focuses attention on the main entrance. Here, the entire assumption connects with the city. Along the street,
a wide foreground with a comfortable driveway and designed fountain aspires to the rank of a square. A convenient parking lot is planned under it. What makes this place special is the adjacent large park. Entering the interior of the building under a spacious
arcade, we go through the free, open ground floor of the existing building, being in the right foyer. This space becomes a multi-functional, roofed and public square. The floor takes the form of a soft fold, repeating shape of the concert hall, giving the passage landscape features. The border between the outside and the inside is not obvious. The amphitheater, labyrinth, water reservoirs, new paths, benches and trees create a favorable atmosphere of the place and encourage to spend time there.

CHUNK - arbor in the landscape
New architecture enters into a dialogue with the past. It strengthens the current order and gives the whole a new hierarchy. The expansion composition took the form of an inviting announcement. The cornice above the ground floor creates a deep arcade, which
emphasizes the new entrance to the philharmonic. The horizontal line becomes the edge of the terraces, roofed entrances, lawn for vine, underlining the open nature of the foyer. The cornice becomes a functional and symbolic motif emphasizing the combination of "new" and "old". Above the roofs of the existing building, the body of the concert hall emerges on the axis of the new entrance.
The material used for the facades is sheet metal covered with a copper and bronze alloy. Its texture and colors build associations with the industrial, local architecture of furnaces and metallurgical installations. The new part thanks to the openwork trellises and nets, the use of large glazing and hanging gardens becomes part of the green landscape, something like a orangery or a park arbor.

FUNCTIONALITY - space intuitiveness
The space is divided into musician and audience zones, according to the specificity of the "musical" building. The whole premise along with the surroundings was designed in such a way that the paths of the audience and artists do not cross, and at the same time that the
organized space favors meetings in public places. Two added spaces: the public foyer and the main concert hall create the necessary complement by interfering with the existing structure. The reconstruction of the central part of the foundation between the wings of the existing building allowed to integrate and organize internal divisions.

Audience
At ground level, music lovers use convenient entrances from both the city and the park. The public foyer provides all basic and complementary functions. The ceremonial stairs and comfortable lifts take you to all levels of the foyer and concert hall. The highest level is the observation deck.

Musicians
The world of musicians was organized on two floors along the transverse axis. The orchestra's life focuses around the stage. That is why the orchestra rehearsal room and both stages of the concert hall and chamber hall were placed on one level. Musicians staying together before and after the concert enables a comfortable backstage complemented by a spacious terrace with greenery.

CONCERT HALL - experiencing music together The Great Concert Hall is the most important and characteristic interior of the entire establishment. Therefore, in addition to all functional advantages, it was given a sculptural, recognizable form. The interior around the stage is shaped by an acoustic structure suspended above the audience. Its form resembles wings which open to flight. The koncept Has a "compact shoe box" solution. An innovative, but already proven solution are open spaces inside the room behind balconies and
"collars" forming high balustrades behind the last rows. The audience for 1230 music lovers was placed in sectors around the stage. Stage allows any shape of its layout with adapting to the specifics of the concert. The unique nature of the interior is emphasized by the access to daylight obtained thanks to the roof skylight. The Chamber Hall uses the potential of the existing building. Due to the valuable architecture of the historical interior, it was decided to equip the room with free-standing elements creating proper functionality with the audience, stage and necessary acoustic systems. The auditorium with 420 seats is provided with movable platforms with armchairs, which can be hidden in the area under the rear balcony. It is also possible to dismantle the stage ensuring
an even floor level. The motif used in the interior is an openwork wall made of wooden slats playing a triple role: it gives the interior a unique character, ensures adequate reflection and dispersion of sound, and leaves open, active acoustic space behind the cover. 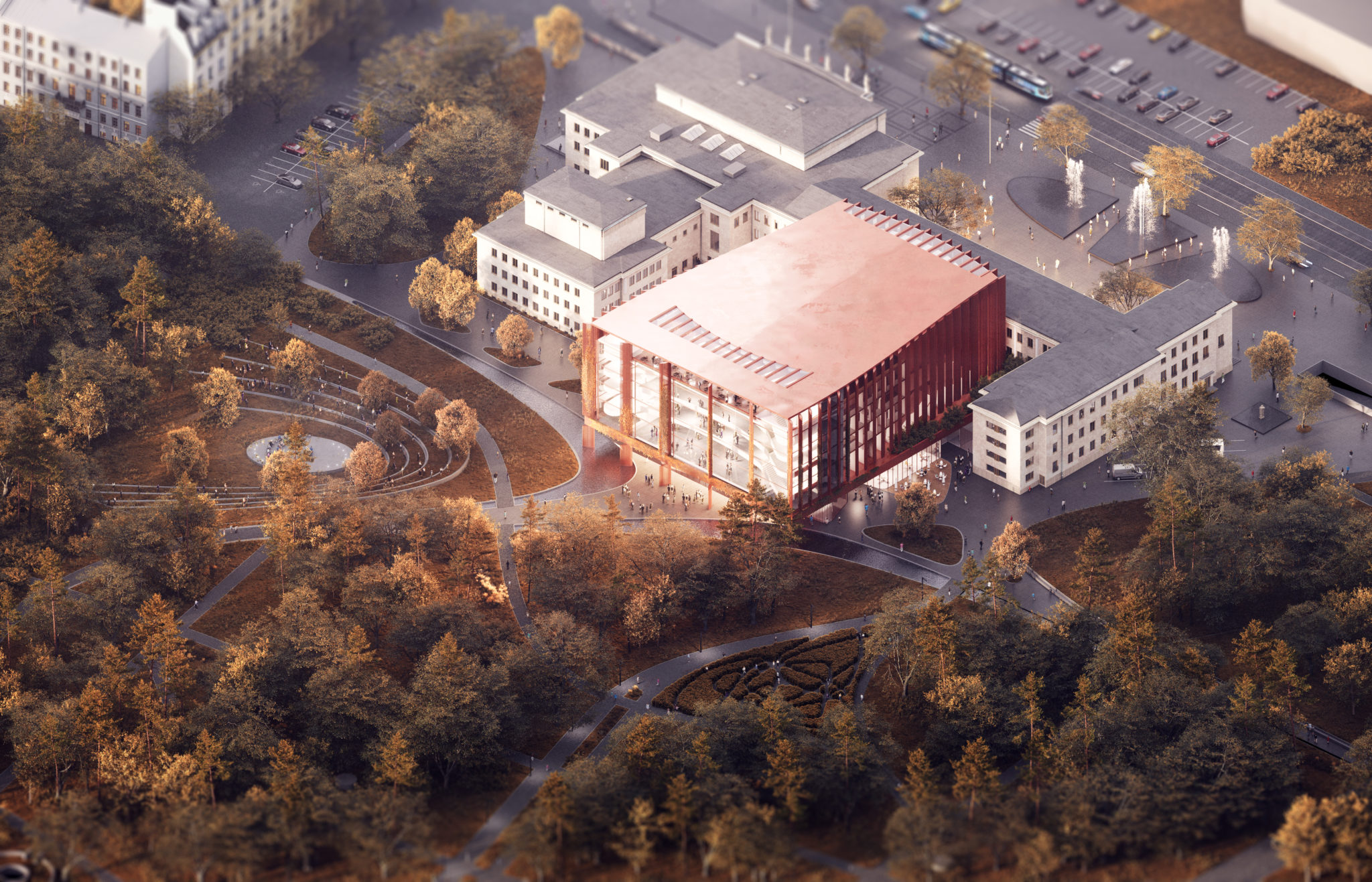 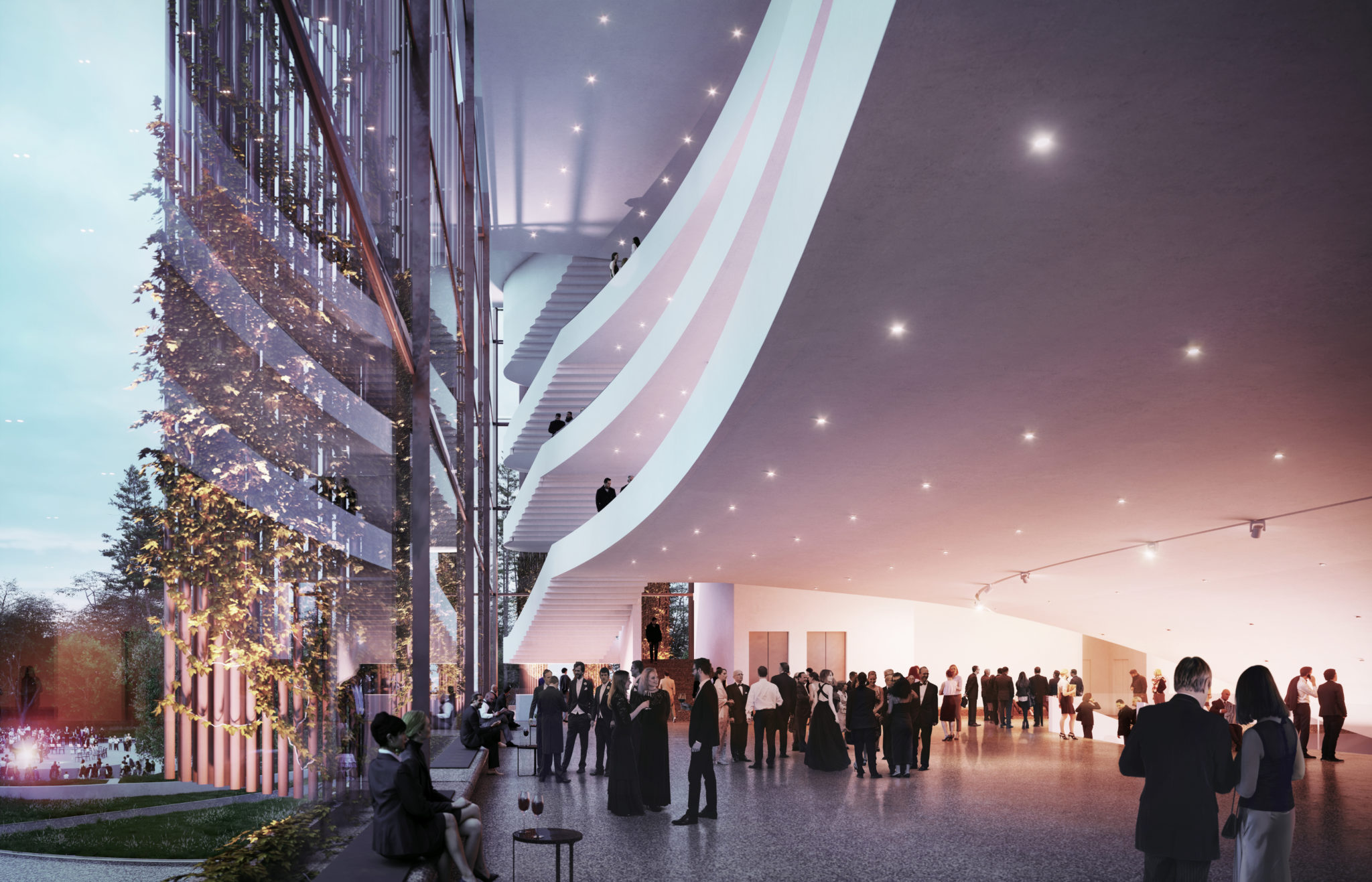 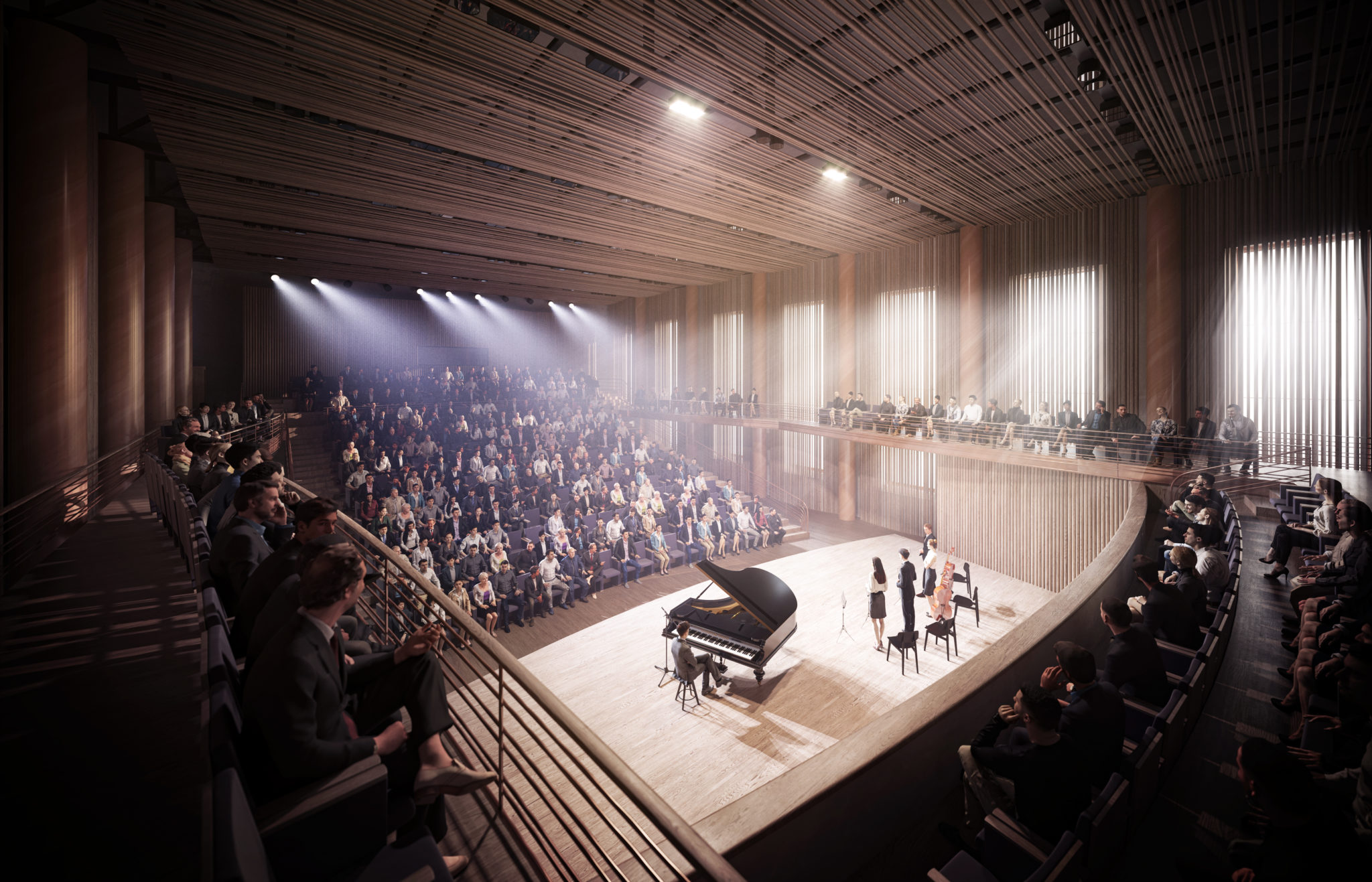